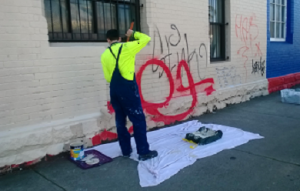 We keep being told that people can’t get individualised lifestyles when they are living in staff residentail units (CRU’S). That people who live in them who need higher levels of support have to be in group supports because of staff and time.

That just isn’t true. It’s not true especially if people with a disability and their families, know what they want and keep saying “ I want it to happen”. This story is an example of that……

We support Simon in our individualised arrangements, who is a young man who has autism, he lives in a CRU. While Simon is quite clever he has some extremely difficult behaviours. He regularly just takes off and jumps fences into peoples back yard, runs into shops and take things, can be aggressive with staff and others. His behaviour has had him be the subject of multiple police searches, and he has ended up in hospital ollowing a brutal bashing after being found in someone’s back yard. Sadly he also had a reputation in his local community as an aggressive thief and he was banned from is local supermarket and other shops.

When we met Simon it was hard to work out with him the things that made sense to him in terms of ambitions and a good life. He is not a very good talker and he was surrounded by overwhelming concern for his behaviour and controlling it. His house staff and planner only had one idea; that was full time groups supports and high security. As we got to know Simon it was clear that he didn’t like groups supports and he couldn’t stay on task much but what he knew was that he liked things that had a clear start and finish, he liked paint, generally preferred to be alone and he was always happier when he had small valued roles; he had never had had a chance to have big valued roles. Something that has a clear start and finish, and uses paint , is graffiti removal. Our staff worked with the local council and Simon became a member of their graffiti painting/removal team and works with them for a few hours each Friday, for payment. Our staff are with him during this. He never ran away from this.

He worked for the Council steadily for well over a year on Fridays and now has started to branch off for himself. He and his support staff canvas the local neighbourhood and he is getting paid for private work painting over the graffiti on the walls of local businesses. Yes our staff still need to be there, but they are useless painters and Simon does all of the work.

This year Simon has branched out in his business and it now includes window washing of local shops for payment. He now has two shops where he regularly cleans the windows. One he approached by knocking on the door and another because they saw him work and needed a window cleaner and they asked him. And, he doesn’t just work alone now. Simon developed new relationships with two fruits shops at the local market and he collects food from them each week and takes it to the local Salvos where he works alongside others to cut up and prepare the food for cooking. Simon earns an income from his part time jobs but that is not really the important it. The great bit is his valued roles, how he sees himself, his greater comfort and lessened panic in the community, his contribution to his local community, that he is talking more to people, the improvement in his reputation around where he lives and the increase in the natural, normal and healthy relationships in his life. 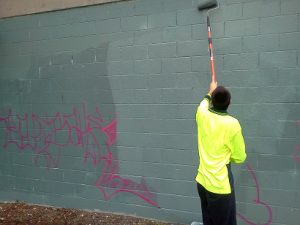 None of this happened in Simons life just because he was in the right place at the right time. Simons life was, and is, extremely complicated and to get to where he is took time, planning, engineering and a massive change in the expectations that surrounded him. For example when we first met Simon just about everyone, except his mum thought that thinking Simon could earn money was almost grounds to be declared insane. Now the very thought of Simon not earning money is almost grounds for dismissal at Milparinka.

But this journey didn’t start with us, it started with Simons mum, who wasn’t swayed by what experts told her was best for Simon; groups and security. The best thing that Simon had and has is in his life is someone that says I can imagine a better life for Simon and she was prepared to look services in the eye and say I WANT instead of what can you do for me.